Why Should You Send Your Child to a Montessori School?

What is the Montessori Method of Education?
Dr. Maria Montessori (1870-1952) was one of the most important early-years educators of the 20th century. She was the innovator of classroom practices and ideas that have had a profound influence on the education of young children the world over.

She was the first woman to graduate from the University Of Rome Medical School and became interested in education through her work as a doctor, treating what today are known as children with Special Needs. When she went on to establish schools for the disadvantaged children of working parents in Rome she approached their education as a scientist, using the classroom as her laboratory for observing children and finding ways to help them to achieve their full potential.

It soon became apparent that Dr. Montessori had developed a highly effective method of teaching which could be used with great success with each and every child. She began to travel the world, establishing schools, lecturing about her discoveries and writing numerous books and articles right up to her death in Holland in 1952 at the age of 82. Many countries honoured Dr. Maria Montessori with royal, civic and academic awards. For her lifetime of commitment to the education of children, she was nominated for the Nobel Peace Prize in 1949, 1950 and 1951. She was deeply moved by this honour

Dr. Montessori's method of education combines a philosophy of freedom and self-development for children with a practical approach. Her Children's houses as she termed them, provide a safe, carefully planned and structured environment for children to work in. She believed that all children want to learn and can absorb knowledge without effort if they are given the right kind of activities at the right time of their development by the teachers who are trained to observe carefully and respond to their individual needs. The philosophy underpinning her work is one of respect and to care for all children; the ideal Montessori teacher is gentle, sympathetic and always looking for the best in any child.

Montessori also believed that her children's houses should teach peace. cross-cultural understanding and care of the environment. Although the approach was developed over a century ago, her ideas are at the forefront of current educational thinking and remarkably well suited to a time when the need for excellent nursery education provision for all the children has at last been recognized. 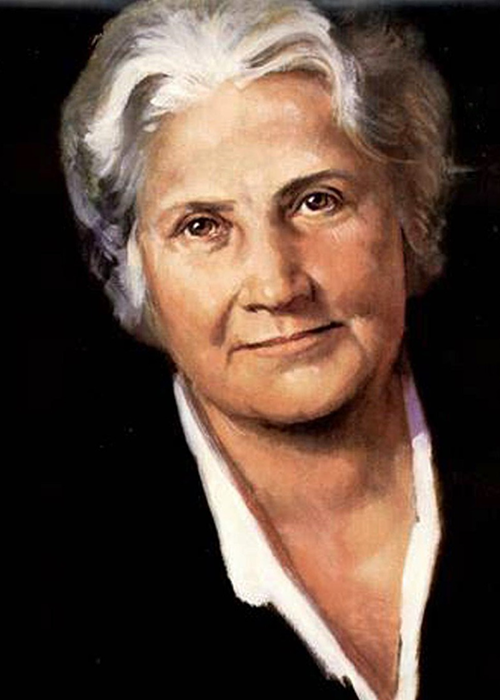 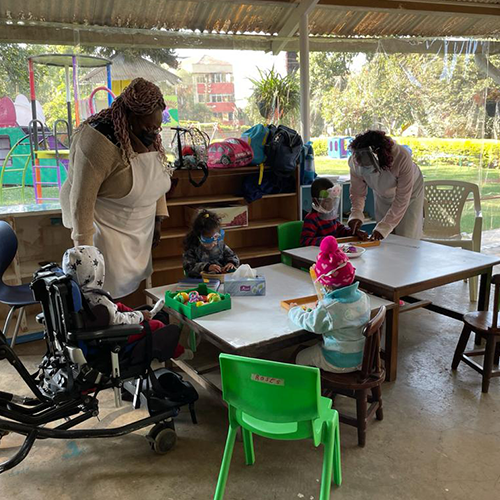 How Montessori Works At My School
Developing the Whole Child
"Among the revelations the child has brought us, there is one of fundamental importance, the phenomenon of normalization through work….. It is certain that the child’s aptitude for work represents a vital instinct, for without work his personality cannot organize itself and deviates from the normal lines of its construction. Man builds himself through working."

Dr. Maria Montessori’s approach to education was to observe children carefully to discover their individual needs. She was a great innovator, always aware that education needs to change as society changes. She believed that teachers could be trained to make children confident and capable self-educators prepared and equipped for the future.

The Montessori approach places emphasis on educating the whole child, covering all aspects of development – intellectual, social, physical, emotional and spiritual. Building upon children’s intrinsic desire to learn, Montessori created ideal environments full of opportunities for children to experiment and initiate their own education.

At the heart of the method are the Montessori materials, beautiful and enticing pieces of equipment each carefully designed to incorporate a teaching purpose. Understanding, dexterity and skill are developed every time the child uses them.

Practical Life Activities
"In order to learn, the child must first be able to concentrate…. But no one can force concentration upon him/her. He/she develops concentration by fixing his/her attention on some task he/she is performing with his/her hands"….

On first entering the Montessori school children are given the opportunity to develop important life skills that will allow them greater freedom in the classroom. Activities in the practical life area build on the child’s natural interest and help him develop good work habits, concentration, eye-hand coordination, a lengthened attention span and control of his body.

They learn to manage their own clothes, using dressing frames to practice buttons, zips and bows. They are also shown how to care for their classroom, using child-sized brushes and dusters. Developing practical skills-like pouring drinks from a jug and laying tables- and social skills with friends and teachers, enables them to feel capable, self-reliant members of the community. 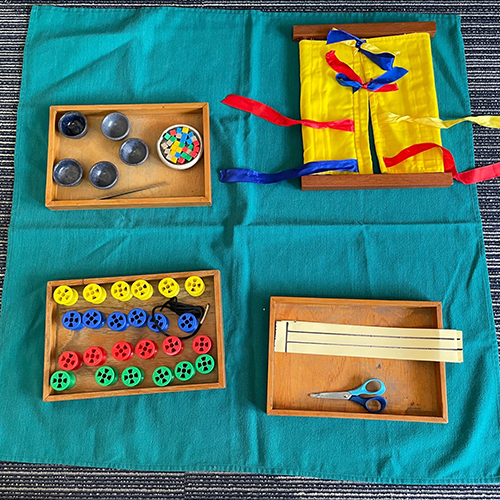 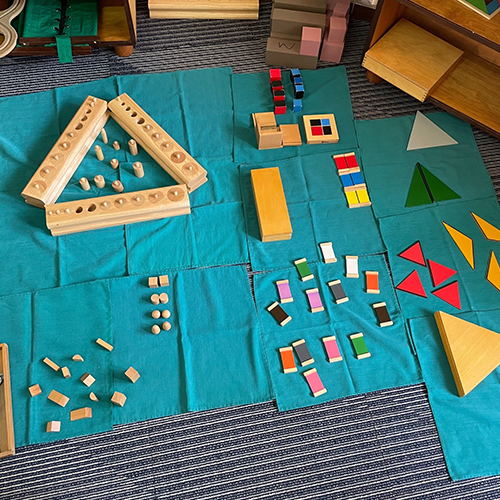 Sensorial
"The senses, being explorers of the world, open the way to knowledge….. Since “nothing comes to the intellect that is not first in the senses,” the Montessori environment provides a wide range of sensorial materials designed to help the child develop his/her ability to make judgments, to compare and discriminate on the basis of size, shape, weight, texture, colour and temperature; to store up impressions in his “muscular memory,” and to develop the use of certain muscles and certain Motions."

First learning is through the senses so Montessori schools use a range of well thought out exercises to help children sort, match, compare and seriate objects by shape, size, touch, taste and sound. There are jars to be sniffed for their aromas, sound cylinders to be listened to, colour tablets to be arranged in gradation, block towers to be built and knobbed cylinders to be put in their places. These early sensorial impressions boost children’s powers of observation and discrimination, broaden their vocabulary and contribute to their understanding of formal educational concepts.

Language and Literacy
"Working with the individual letters of the alphabet, the child can match these with the sandpaper letters, tracing their shape on the sand paper with his/her fingers thus reinforcing his visual recognition of the letters. Using small pictures the child will then sound out and construct words with the letters.

In writing the child exposes his own thoughts through symbols; in reading he must comprehend the thoughts of another.

Montessori’s language materials are based on a carefully structured phonic approach to writing and reading. Recognized for their excellence, they are used widely in many non-Montessori schools and settings where special help is required. First, children learn sensorially by tracing sandpaper letters with their fingers while they are told the sounds. Soon they are writing simple words with moveable letters, matching words with objects and reading their first stories in phonic readers. When asked how they learned to read and write Montessori children will often answer. “I did it myself.” 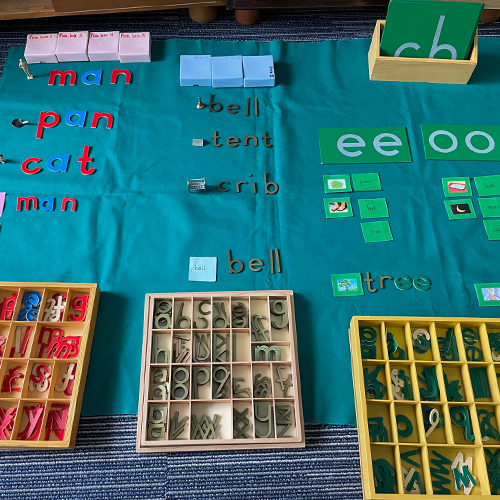 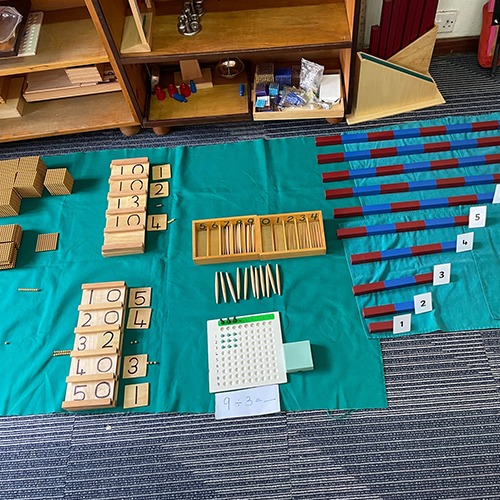 Mathematics
"This system in which a child is constantly moving objects with his hands and actively exercising his senses, also takes into account a child’s special aptitude for mathematics. When they leave the material, the children very easily reach the point where they wish to write out the operation. They thus carry out an abstract mental operation and acquire a kind of natural and spontaneous inclination for mental calculation."

By using manipulative materials to learn the fundamental concepts of Mathematics at an early age, the child easily assimilates the basic facts and skills. Children need to be able to move the items as they count them to gain a real understanding of the quantities. They are also self-correcting, which means that children can see at a glance if they have made a mistake and can put it right without a teacher’s help. The satisfaction of discovery leads to an enthusiastic interest in numbers when the child is able to demonstrate the essential mathematical operation, rather than simply being told seemingly dull and meaningless facts.

Cultural
"A part of the normalizing process is to help the child understand and be comfortable with the things of nature. Working with growing things planting bulbs, collecting and identifying leaves, is an important part of the Montessori environment."

In the Montessori classroom children use globes, puzzle maps and flags to underpin activities that build their understanding of other countries, cultures and people. Children are also taught to match, classify and name the elements and species of the natural world using picture and name cards. Classroom plant growing and caring for pets help to form a bridge between the child’s knowledge of the immediate environment and the wider world. 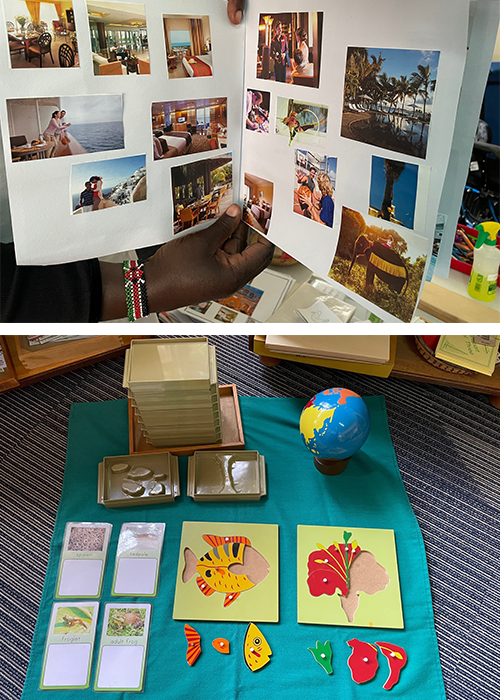